Communications towers are light and strong. When cell towers were first built they were typically designed for use by one carrier. The original projections for market saturation were way off. Now not only is the cell market 100% saturated, it is more like 150% saturated and still growing. The impact on cell towers is profound. Now it is not unusual to have multiple carriers on a tower. It is not unusual for the proposed load to exceed the design limits of the tower. Visualize a heavy load at the end of a long lever with a strong wind acting on it. 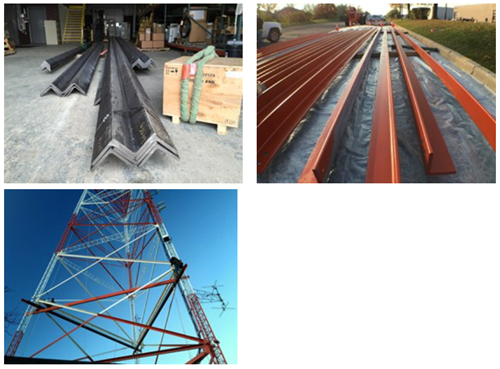 Photos above showing raw steel, painted and drilled steel and temporary supports being bolted in place on the tower.

Tower owners and their engineering firms analyze this very carefully before approving the placement of additional antennas and radios on their towers. A great deal of time and money has been spent to insure that towers are reinforced to carry more loads.

After the design work contractors like Electric Conduit Construction bid on these projects. Adding structural reinforcements can be as simple as clamping, bolting or welding steel onto the existing structure, or can be complex and involve the actual removal of existing support members and replacing them with stronger braces. If it is the latter the work can be demanding. 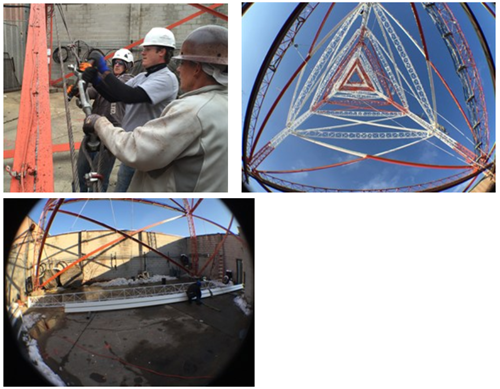 The photos above show the crew tensioning temporary cable bracing, a view of the tower through a Ztylus Fisheye lens showing the hoizontal trusses that will be removed and replaced, and a view of an old truss lowered to the ground and a new brace ready for hoisting.

Electric Conduit Construction recently took on a project on a 200’ microwave tower that was built with welded steel truss work for the horizontal members. Due to the increased load of additional antennas and radios the tower had to be reinforced. All of the truss work had to be removed and replaced with 6" x 6” x ½” angle iron bolted back to back and mounted in the original web plates that held the truss work. Each member weighed over 1,400 lbs. Each weighed a little less as the height increased due to the taper in the tower, but not much less.

Prior to starting work our Project Managers analyzed the prints and created a construction schedule for steel fabrication, painting (The tower was near and airport and had alternating orange and white sections), and removal and replacement. 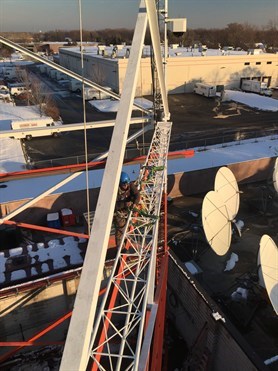 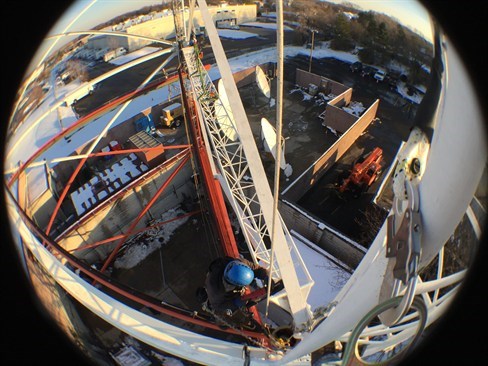 Photos above show the old truss work being cut out and rigged for lowering.

At the same time an engineering firm was engaged in developing a plan for temporary bracing of the tower while the existing trusses were removed, and a rigging plan to lower each old truss and hoist the new ones in to position.

Our safety officers were involved to review the protocols for climbing safety, rigging to move materials on the ground and in the air, tool safety, and slip, trip and fall safety due to icy conditions.  The entire project was weather dependent both from the standpoint of temperature and wind. No work could be done if the wind speed exceeded 15 miles per hour. 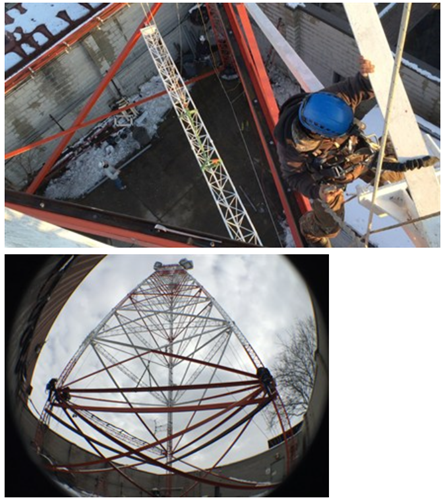 Or crews worked 10 hour days to get the project underway. The photos in this article show the lower section replacements. As the project progresses more updates will be posted. Thanks to Ztylus for the 4-in-1 iPhone lens kit.

Final brace in place and temporary brace being lowered. Job completed with no incidents or injuries